This is an ode to my signature fragrance.

Looking at the receipt right now, I can't believe that I've only had it for three months.  But, before I get into it I'd like to briefly take you through my perfume history.

The first perfume I'd ever purchased as a young'un was this:

Remember this ad in magazines way back when?  There were the foldy flap things on the sides with the perfume enclosed.  I was inexplicably drawn to it.  An attraction that I can only liken to the seductive fumes of fried chicken.


I was the typical teenager who had a proclivity for fresh, fruity fragrances.  I went through a phase of collecting Anna Sui perfumes, the majority of which were housed in mini bottles.  Granted, some of them were far from "fresh," but how could any teenager pass on the ridiculously cutesy bottles?  Gotta say though, even as a hormonal tween, I was "practical" enough to know that I would never finish a bottle of perfume to necessitate (or justify) the purchase of so many regular sized perfumes.

As my olfactory preferences continue to change, however, I find myself wanting a fuller, rounder scent.  I don't know if that makes sense.  Fresh fragrances are now, to me, too light--lacking the earthier, muskier notes to pull it down and make it more rounded.  Much like elementary grammar classes, there are flat characters and round characters.  I find the majority of mainstream fresh fragrances to be too flat, lacking dimension.  I want it to surprise me throughout the day, as it mingles with my body chemistry.

When I first got a whiff of MJ's famed Daisy, I thought it smelled like an old lady.  I thought it was way too pungent for my taste.  (I remember one time, I got into M's car--for a shopping extravaganza, what else--and thought, HOLY PERFUME! THAT IS STRONG.)  But as I made my trips into Sephora more often, and smelled a few more times, I decided that I liked how it smelled as it wears down after the intial spritz.  It took on a softer, sweeter (but not gross candy sweet) scent and just had a good time with my skin.

THE POINT?  I thought I had one.

I think the point of my long-winded story is that while many people perceive Daisy to be very fresh and light, it was the gateway into muskier scents for me.  It's funny how that works. This evolution of disgust to love for a fragrance was also true of my relationship with the Chloé perfume.  The problem with these perfumes, however, is that everyone has them.  Like, everyone.  The girl beside you, the girl behind you, the guy in front of you, and the transgender diagonal to you.  And the dog.  And more importantly, they were pleasant enough when I wore them, but they weren't "me" per se.

Then I met Jo Malone's English Pear and Freesia and it was love at first whiff.  I didn't take it home with me when we first met because it was such an expensive date.  I believe a 30mL bottle retails for around $70 CAD.  But then I found myself unable to think about anything else.  It balances fresh and musky so well that I really couldn't ask for more in a fragrance: English Pear & Freesia was me.  I was English Pear & Freesia. 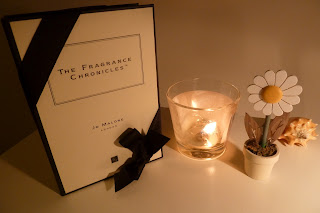 So I returned to Holt Renfrew (it's the only place I know of where I live that sells JM) and the saleslady was incredibly helpful and patient.  I tested out several other fragrances, including Wild Bluebell, which I think is one of their most popular fragrances.  Pleasant as it is, I find it a bit too light, needing a bottom note to ground it.  Then again, you cannot fault any of JM's fragrance for being one-dimensional because their whole philosophy is to encourage people to personalize and individualize their fragrances by mixing and matching different colognes.  That being said, executing this philosophy would take time: not only to put some thought into coordinating fragrances, but to save up enough money to do so!  I appreciated that English Pear & Freesia, while friendly enough to complement other perfumes, it is also independent enough to hold its own:  i.e. it's low-maintenance.

The only decision left to make was which size to get.  I knew I wasn't getting the larger bottle for over a hundred dollars.  A fellow shopper who was in a similarly mulling state told me that the small bottle lasted her forever.  Cool.  30 mL it was.

Then the clever saleslady showed me the fragrance set.  It featured the actual 30 mL bottle of English Pear & Freesia as well as three 9 mL bottles of the main notes, namely King William Pear, Freesia, and Patchouli.  The idea is that you could enhance any of the notes in the fragrance to your liking/mood.  Oh, and of course it was limited edition.  Fuck.  This motherfucker was $125 CAD (not including tax).

I've returned to Holt Renfrew several times to check out some of their other colognes from the permanent line, with special attention to the Spring, Summer, and Limited Edition collections.  Last week, I beelined to the JM counter to check out the newly released Plum Blossom.  If I did not have Chloé, I probably would have bought it.  When I told the saleslady that it reminded me of Chloé, she said that it was because both fragrances have rose water, albeit Plum Blossom is fruitier (because of the plum, duh).  I couldn't smell the difference, to be quite frank.  Who knows, maybe I will admit defeat and get it.  (Watch it get sold out by the time I make this decision.)

By the way, they've reintroduced their Tea Fragrance line from a year or so ago.  I've dreamt of this moment ever since this post from The Beauty Look Book.  I was especially lusting after Earl Grey as I love the smell of the tea itself when it steeps in a pot of hot water, perhaps more so than the taste itself.  However, it was not at all what I thought it would be--very spicy--almost masculine.  Sweet Lemon was very pretty, but didn't make my panties drop like English Pear & Freesia did.  It vaguely reminded me of Anna Sui's Secret Wish perfume.  Kind of.  Sort of.

And that's it.  Thank you for reading.