Because everybody and their dog went to Vegas, I, too, hauled my share of goodies from that bright little strip in the desert.  I did not go with M, but she was with me in my heart.  I stayed at the Vdara and enjoyed this magnificent view. 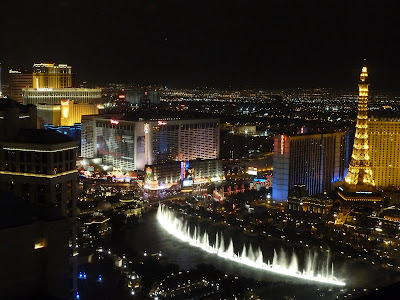 I know we've probably overused the word "Practical" at this point.  Still, I cannot help but bring to your attention that my purchases were indeed quite practical.  For a more colourful and glam haul that is more fitting for the city, please check out M's haul below.
While blogging about a haul (and a Vegas one at that) is not particularly original , I think that starting off with one may serve to tell you a bit about our tastes - how M and I are similar, but also how we complement each other.  Hence, our joint efforts at this blog!
My apologies, the photos are a bit ghetto.  BUT!  Hold on to your knickers.  I am still figuring out how to best capture these without my man-hands casting ominous shadows. 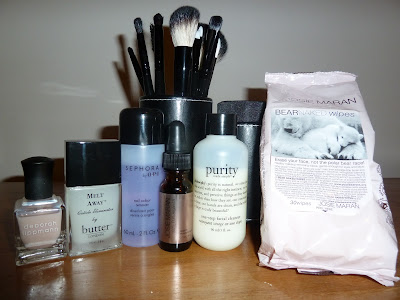 Butter London - Melt Away Cuticle Eliminator $24 CAD
I have had several manicures in my lifetime, probably less than what the fingers of two hands can account for.  The results have always left me wanting.  I figured I could do as good a job, if not better, so why pay 20-30 bucks a pop for such an expensive habit?  Armed with arrogance, I maintain my nails myself.  For the longest time, I stayed away from cuticle removers because - well, they scare the shit out of me.  What the heck is in this stuff to dissolve your frickin skin?  And for god's sake, how does it know how or when to stop at the dead skin?  I mean, why would it stop there?  Couldn't it dissolve the nail, too?  AND YOUR ENTIRE FORKIN FINGER?
Fortunately, vanity does help to quash irrational fears of digital mortality.  I have heard some people talking about Sally Hansen's cuticle removers.  Par exemple, the lovely Sandra in video form and bloggity goodness and Michele showing us her manicure routine.  However, I decided that I wanted to try this one: 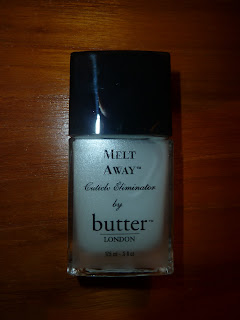 I slap it on and wait a minute or two.  Then I use my fancy cuticle pusher (ie. my own nails) and start pushing like a pregnant woman with a dilated - never mind.  I find that it works even better when I put it on right before I hop in the shower, as the warm water facilitates cuticular (I like to make up my own words too) removal.  Or, you could do it the fancy way and delicately dip your fingers into a crystal dish of warm mountain spring water while being fed grapes.

Cut the BS: I really like it.  But given that I haven't tried any other brand of cuticle remover, I cannot say whether or not it is necessary (or sensible) to spend $24 for it.
By the way, when I googled "Cutical remover", the first result was "Cuticle remover poisoning."  It scared the daylights out of me until I read on to "Cuticle remover poisoning occurs when someone swallows this substance."  So...no, I don't planning on swallowing it.  But...thanks for the offer.  (I know, I know, kids could see it and think it's lemonade, blah blah blah.)
*****
Deborah Lippmann - Turn Back Time Rejuvenating Base Coat $18 USD
My search for the perfect base coat has come to an end.  This may just be my HG base coat.  I have used various drugstore base coats, OPI's regular base coat, OPI's Nail Envy (Original), and Seche's Crystal Clear Base Coat.  The consistency of OPI's base coats start off very thin, but often get really thick when the bottle is halfway done.  Seche's, on the other hand, is extremely thin and has this weird cooling sensation that freaks me out.
Then it was Vegas time and I found this at Nordstrom.  It applies evenly and dries quickly.  It even claims to have "diamond core spheres."  Hey, I believe it. 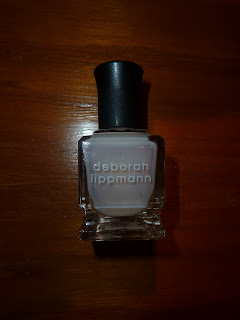 As you can see, there is a creamy pinkish tone to it, which imparts the perfect translucent pink creme on my nails, thus achieving the elusive "my-nails-but-better" result.  I used to use OPI's Moon over Mumbai (looks grey in the bottle, but oddly enough, gives my nails a nice translucent pink) to achieve this look.  But hey, if a base coat can do it, it means one less step for me and one less layer that needs to be dried.  FYI: Because I am paranoid over having yellow nails, I always apply two coats of base coat before applying any coloured varnish.
Cut the BS: HG.  That is all.
*****
Sephora by OPI - Nail Colour Remover (2 oz) $7 CAD
I was in need of a nail polish remover during my trip and I wanted to get a travel-sized one.  I have used ones found at the drugstore, OPI's acetone-free remover (which does not seem to be on their website anymore), Chanel's Nail Colour Remover, and currently, the much-raved-about one by Zoya.
The thing about removers is that I really cannot stand the smell.  In fact, it is a huge ordeal for me to remove nail polish because my hands always reek of it afterwards.  Ergo, I have been on the hunt for one that is the least offensive to the good ol' olfactory.  Although the abovementioned one by OPI claims to be acetone-free, the fumes that emanate from that stuff is enough to shave a few years off your life.  You might as well be snorting meth.
Anyhow, I digress.  I just wanted a travel-friendly one that hopefully did not burn my nostrils.  I decided on the following: 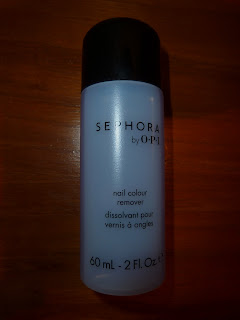 In addition to removing the polish effectively, I must say that the odour is tolerable.  In fact, I was using it in an small, enclosed environment once (car), and my Mr. Lova Lova agreed that its fumes were virtually, if not completely, non-existent.
Cut the BS: No complaints.  It works.  But at $7 for 60mL, you would think that its active ingredients would at least include unicorn tears.  I read the ingredients list.  It does not.

*****
Josie Maran - Bear Naked Wipes (30 wipes) $15 CAD
My first introduction to makeup wipes were from Mr. Lova Lova, actually.  He saw me rubbing fruitlessly at my eyes with cotton pads and decided to buy me a pack of Neutrogena makeup wipes.  Let me tell you right now that my skin is not particularly sensitive.  It is pretty tolerant of the average skin product.  However, the moment I put one of those wipes on my face, it burned like a mofo.  I resolved to use it to remove any makeup I swatch on my hands.  Even my hands were not immune to such burning.
So I decided to try my hand (ha!) at these: 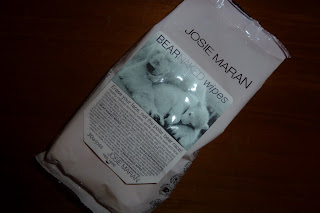 I still have to resist rubbing my eyes, but if I hold this again my eye long enough, it does remove most of the makeup quite successfully. There is a light fragrance to it that I can only liken to lemon meringue pie...but I can attest to the fact that it does not burn my face and is relatively soothing.
Cut the BS: By itself, it is not enough to remove all vestiges of makeup and requires some backup, either in the form of a cotton swab + your favourite makeup remover, or your go-to facial cleansing routine.

****
Philosophy - Purity Made Simple (90 mL) $13 CAD
M's been raving about this since she swagged it from Sephora.  I was hesitant to use it because facial cleansers that exceed (or even come close to) $10 are extravagant in my mind.  When I was younger, I used the one by Neutrogena.  You know, the one that every teen used in the hope of vanquishing the evil that is acne.  Then I switched to one with little microbeads by St. Ive's.  Then I used the orange option of L'Oreal's Go 360.  I eventually gave up on drugstore facial cleansers because my face always felt dry and had that awful tight feeling - even when my face was still wet.  How does that work?  So, my solution?  Soap.  In fact, I haven't had any negative results from using regular (Camay and Nivea) soap.
Nevertheless, on the rare occasion that I put on makeup, I need something that works a bit harder at getting rid of every bit of shadow, liner, and mascara.  M swore up and down that this was the way to go: 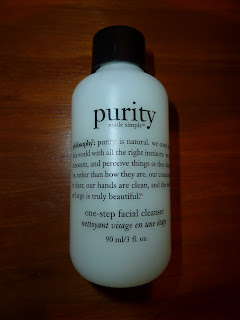 It effectively removes the majority of my makeup (granted, I don't do hardcore smokey eyes), but some residue does remain that needs the assistance of makeup remover.  Most importantly, however, my skin does not feel dry or tight after using it.  The benefit of its creamy consistency definitely does not go unnoticed. 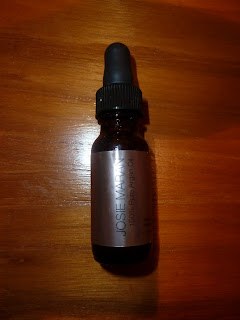 This is the travel-sized one.  I'm not sure if I would ever get the big bottle, just because I don't go squirtin' whole tubes of it all over my body.  I tried using it on my damp hair a couple of times before blow drying, but because my hair is so long, it would take more effort to apply the oil evenly than I am willing to exert at the time being.  So for now, I mostly use it on my hands because the winter cold has been particularly vicious to them this year.  Especially since I use nail polish remover so often, which severely dries out my nails, there is an immediate and noticeable difference when I give my nails a few drops of this stuff.  You can almost hear my nails belting out a chorus of Hallelujah.
Cut the BS: Very light and very moisturizing.  I'd give it a few minutes to absorb into the skin before touching anything, though.  So, if you happen to be the culprit at a crime scene and you don't let your skin absorb it some, you will definitely be leaving some prints behind that could forgo any dusting to be visible.

*****
Nordstrom - Brush Set $24 USD
Sorry about the shadow on the bottom left corner.  No matter how I moved the lightsource, the camera, and my hand, it was unwilling to leave.  Just...focus on the brushes.   10 brushes for 24 bucks?  That's what I call a steal.  I know, I know.  Usually the quality of brush sets that come out during the holidays are lacking.  And with a bit of math, it comes to just over $2 per brush.  How on earth could these be good?  The reviews on the Nordstrom website were largely positive, so I really could not pass these up.
When I got to Nordstrom, the salesperson told me that they were all sold out.  But somehow, we spotted one sitting in the middle of a display counter.  He explained that it was probably one of the sets that were saved for their VIP event in the evening.  Elitist bastards. 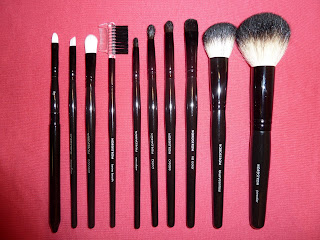 I haven't actually tried these out yet.  I did deep clean them, and for some God forsaken reason, there was an almost fecal odour that emanated from the black-bristled brushes as well as the blush and foundation brushes on the far right.  Did they not clean the animal from which the hairs were plucked?!  Sorry, low blow.  I love animals.  And kids.  Suffice it to say that I will be deep cleaning these again.  Not sure why they have that particular odour and not sure I want to know why.
Cut the BS: Results pending.  Stay tuned...

In the meantime, I hope you are feeling fresh and ready to start another year.  Have you tried any of these products or the products that M hauled?  Let us know what you think :)